Both government and non-government agencies analyze an Angola map showing provinces when developing programs to revitalize the economy. Angola is a Southern African country divided into 18 provinces and 163 municipalities. The municipalities are sub-divided into 475 communes. Angola is the 7th largest country in Africa. It is one of Africa’s most resource-rich countries. Thus, more and more organizations would like to take their hands full in creating programs that maximize the country’s use of natural resources for better livelihood.

An Angola province map can be a plethora of ideas to develop programs for social and economic development especially when mapping tools are applied. For instance, segment datasets by characteristics like inland fisheries, aquaculture, or vulnerable groups. Then, apply network coverage tool to identify which communities are within the nearest radius of a rural organization that promotes pro-poor policies. Ideas will be sprouting limitless once you get the hang of analyzing your province map of Angola. 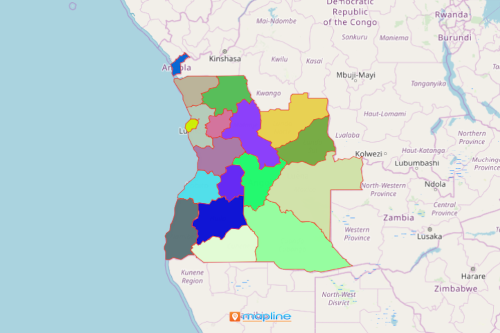 Set your timer to begin overlaying territory boundary on your map:

That’s how easy it is to create an Angola map showing provinces! Once you have your map, you can create a map of Excel spreadsheet locations to overlay on top. Mapline also makes it simple to see summary information about the locations inside each province just by clicking on them. Sign up now to start developing economic programs using spatial analysis and mapping methods.